Home » Blogs » Social Media Isn’t About The Numbers! Or Is It?

I’ve said it once, I’ll say it again. If you ask me what my Klout score is…I’ll likely vomit.

Too many folks get caught up in the numbers game when it comes to social media. They use numbers like “friends”, “followers” and…ewww…”Klout” to determine whether they are doing social right. The problem is, you can buy friends and followers online through your local black hat shopping cart and no one really knows what a Klout score actually means. Heaven knows that it doesn’t tell you whether you’re engaging in social media properly.

So, should you ignore the numbers? Maybe. Maybe not. 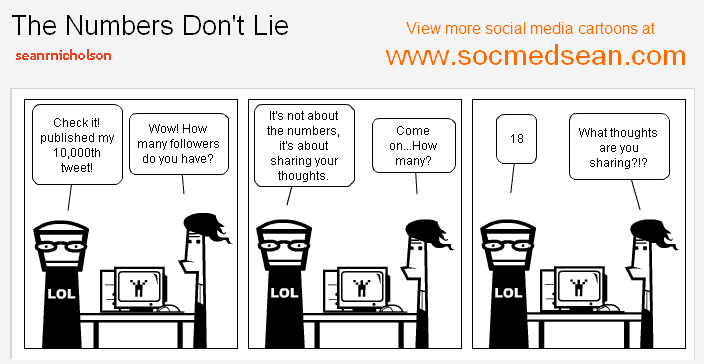 Just like any feedback from your audience, your numbers are an important part of evaluating social media success, but they aren’t your the only factors. For instance, take the poor chap in the cartoon above. He’s been tweeting like mad and is sooo proud to have tweeted for the 10,000 time. To what avail? Does anyone like his tweets? Is he one of those annoying Twitter Noobs who simply tweets what he’s eating, where he checked-in on Foursquare, and quotes from popular authors/politicians? In his 10,000 tweets, did he actually ever contribute to the conversation? Or are his tweets simply noise that are clogging up the Twitterverse?

I’m not saying that he should solely judge his effectiveness in the social space by his follower numbers, but if he’s tweeted 10,000 times and only 18 people have shown interest…I recommend he seriously takes a look at the time/energy he is putting into Twitter and determine whether the outcomes are justifying the time spent.

In fact, this poor soul is pretty representative of a lot of folks trying to get the hang of social media and he probably also has a blog where he publishes links to his online affiliate programs, reposts articles from other blogs (without permission, of course) and is packed with Ads. Why? Because he doesn’t have a clue as to how to become a contributing member of the social space. Trust me…the Web is PACKED with these folks!

Don’t believe me? Google’s Panda algorithm updates are targeting exactly these types of blogs and has already penalized thousands of sites.

So, what numbers should you be paying attention to? I like to focus on those that indicate some level of engagement and interaction. For instance:

On Twitter – I focus on retweets and lists. I love to see one of my articles getting a lot of retweet love. It means that my followers are enjoying my content and found it useful enough to share with their followers. I also love to see it when people add my Twitter handle to a list. It means they took the time to group me with others that tweet similar content to me. I have found some of my favorite authors because a Twitter follower added me to a list.

On LinkedIn – For me, LinkedIn is about good connections! To be honest, I love that LinkedIn is now feeding me articles that are popular with those that I connect with. I find it a lot easier to find business-related articles since I limit my LinkedIn network to those that I really want to engage with professionally. I don’t just connect with anyone on LinkedIn, you have to offer business value to my career. So my number of connections and the interactions I have with them is the key number on this platform.

On My Blog – For my blog, it’s all about daily visitors. I don’t engage in Black Hat SEO to try to artificially inflate visits to my site. I engage in organic social media promotion, sharing my articles on platforms with those who I think would be interested in social media. I primarily focus on generating traffic from Twitter, Facebook, Empire Avenue and Google organic searches. Has it taken me 2 years to attract 1,000 visitors/day? Yes. Am I proud of the visitors who come to my site? ABSOLUTELY! Because they’re coming to learn about social media…not because I bought an online package that will “send 1,000 visitors to your site every day”.

So, it’s easy to sit back and say that social media isn’t a numbers game. But in a way, it is. You just have to make sure you’re focusing on the right numbers. Those that tell you that you’re contributing to the conversation and not just taking up cyberspace.

Have other numbers that you find meaningful? Think I’m full of bunk? I’m always up for engagement in the comments section! Looking forward to the chat!

Social Media Isn’t About The Numbers! Or Is It? was last modified: July 24th, 2020 by Social Media Sean
1.4k
SHARES
ShareTweetPin It
Share