Home » Blogs » 11 Unique Social Media Terms – How Many Do You Know?

At times, it seems as though we are living in the future. Social media has brought our global population closer together than ever before. There is no doubt that along with this advancement in communication, a new language is beginning to emerge.

Social media synonyms are similar to shorthand writing, making it much faster and easier to communicate with shorter versions of words, symbols, and acronyms. Read on to test your knowledge and see how much of this new language you are already familiar with! 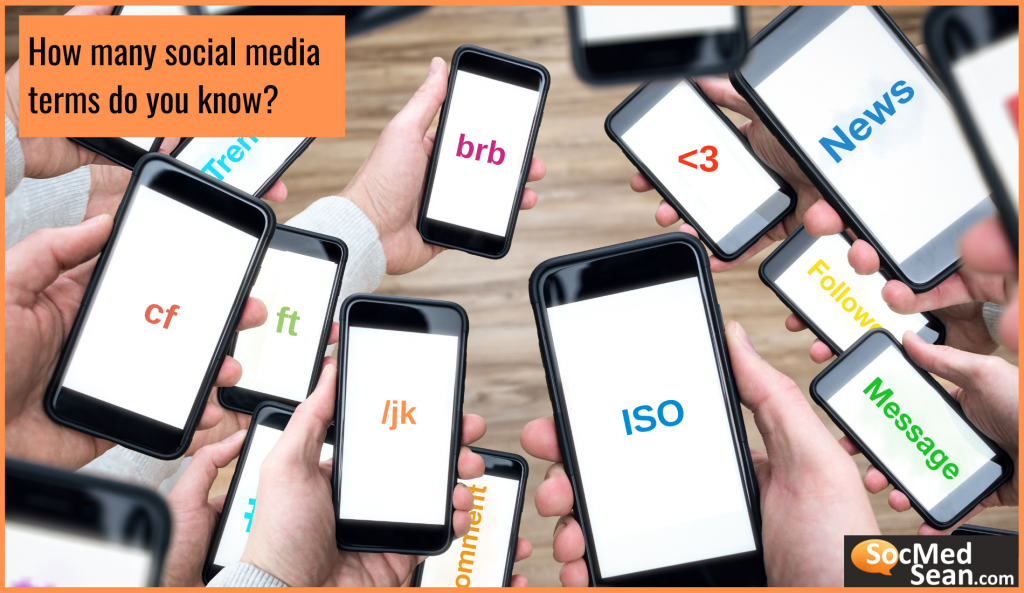 What does 3 mean on social media?

Use of the number “3” has begun to expand into new meanings far beyond the numerical value typically associated with this symbol. Now, its definition depends on context and accompanying symbols.

The use of /j on Twitter means that the tweet or post is meant to be delivered in a joking manner. Tone can be easily misrepresented without the ability to see body language or hear a person’s voice, so this way the reader is able to decipher exactly which tone was meant to be conveyed.

This one really brings friends closer together, as “cf” means “close friends” on social media. Close friends are a carefully selected group of people that the user wishes to share their thoughts, photos, videos and stories with.

What does tw mean in texting?

Aside from social media language, digital shorthand is also used when sending quick text messages. As we all know, texting made communication much faster and simpler after emerging in the early 2000s.

What better way to increase efficiency than to send a short message with a quick acronym included? The letters “tw” translate into “trigger warning,” a commonly used internet label warning users about the contents before being viewed.

What does pm stand for in text or in chat?

Whether texting via cell phones or chatting on the internet, “pm” means “private message.” This is commonly used when referring to direct messages between users on Snapchat, Facebook, Instagram, TikTok, Twitter, and WhatsApp.

Private messages are not public posts and can only be seen between selected users. PM meaning in text is the same as its meaning when used on social media.

What does ft mean on social media?

Communication has become even more effective with the use of video calls, in which users can speak while viewing real-time video of each other. Most commonly used is Apple’s “FaceTime,” which can be shortened into “ft” in social media conversations.

Likewise, the ft meaning in Snapchat indicates that the user is referring to FaceTime.

What does sa mean in texting?

Depending on context, “sa” has a few different meanings. One unfortunate definition of this slang term is “sexual assault,” or can also be used to indicate “social anxiety.” This can also be used as a discreet code for “sibling alert” while texting, chatting or messaging each other.

Nothing worse than accidentally sharing your secrets with a friend’s younger sibling because it wasn’t known that they could hear or see your conversation!

What does dp mean in social media?

Another term for social media is a “public communications platform.” Many of these applications allow for users to create a profile picture. Another term for these photos is “display picture,” which can also be referred to as a “dp.”

This is a great way to refer to someone’s most prized photo; the one that most people consider as a perfect representation of themselves!

What does iso mean on social media?

Sometimes, people use the internet or its many social media platforms to look for information or images. This research can be easily inferred by use of the term “iso,” which is most commonly used to say “in search of.”

Users can quickly determine whether a poster is researching when they display “iso,” and can lend a helping hand if they have the desired data readily available.

What does brb mean in social media?

This phrase has been around for quite some time and originated in the early 2000s along with chat rooms. It is even spoken in face-to-face conversations quite often now!

“BRB” is a short and fast way to say“be right back,” indicating that the user will be unavailable for a few moments.

What does jk mean in social media?

Another phrase that has been commonly used for a while now, “jk” is very similar to the /j definition, as it means “just kidding.” This is a great tone indicator, and one that is less likely to be confused by the older generation of users, as it has been popularized quite some time ago.

After reading through this article, how did you do? Were you familiar with these many new terms, abbreviations, and iconography? We hope you enjoyed learning and refreshing the definitions for these social media terms. The list is always evolving and growing, so please share your unique terms in the comments!

11 Unique Social Media Terms – How Many Do You Know? was last modified: January 6th, 2022 by Social Media Sean
ShareTweetPin It
Share