Unless you have been living under a rock or on an island populated primarily by men, you have likely heard a slight shift in the vocabulary of the women around you. The terms “pinned” or “pinning” are no longer accompanied by the details of a fraternity dating ritual, but instead are followed by dialog about recipes, shoes, arts and crafts, or wardrobe ensembles. 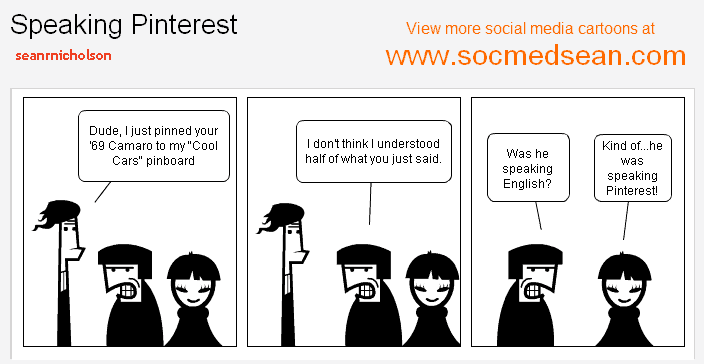 While not necessarily a new site (it launched in beta in 2010), Pinterest is coming into its own with a female-dominated demographic that has rocketed past Etsy in membership and traffic.

Through the use of a custom browser widget, Pinterest members can capture media from any public Web site or blog and “pin” it to a virtual pinboard, usually organized around a specific topic (e.g “cool shoes”, “food I’d like to try”, or “my art”).

The results are uniquely crowd-sourced aggregations and classifications of content from across the Web.

The sudden explosion of traffic to Pinterest has a lot of analysts scratching their heads trying to determine Pinterests’ magic recipe (no pun intended) and what impact the explosive growth in membership might have on other social networks.

With a limited number of hours in the day, could Pinterest actually draw users away from other social networks like Facebook and Twitter? And what about Google+? Google’s entry into the social space started with a big bang and, just as rapidly, fizzed. So what does Pinterest have that Google+ doesn’t?

In my opinion, it comes down to three key elements:

1. Something new – Pinterest isn’t just another “me-too” social network that is tries to copy the functionality of other networks. The concept of aggregating and pinning content isn’t completely novel (just check out your office bulletin board), but there are no status updates, no games, and no chat. Just create a board, pin things to it, and follow any other boards that interest you.

Where they have excelled over Google+ is by offering something unique. If you look at the core functionality of Google+ (status updates and making/grouping connections), it’s not that different that Facebook and Twitter.

The addition of video chat to the mix just wasn’t enough to draw users and that meant drawing users away from Skype. And please don’t start quoting the number of Google+ accounts to me, because the number of actual Google+ users vs. the number of accounts is dismal.

2. Ease of use – The fact that Pinterest has kept it simple has benefited them significantly. As Facebook and Twitter add new features to their networks, making them more complicated to use, Pinterest offers a quick, simple way to create an account, build a pinboard, and start pinning to it. Easy-peasy-rice-and-cheesy.

Google+, on the other hand, went all-in with every bell and whistle they could possibly find, making an overly-complicated social network that takes a manual to understand how to work.

Rather than spend a significant amount of time trying to figure out what a Circle is and why a Hangout is worthwhile, users just went back to Facebook, Twitter and Skype.

Whether it’s pinning together outfits, travel destinations, craft projects, or just about every other topic out there, women have found the value in bringing collections of content together for their reference and to share with their friends.

Google+, on the other hand, failed miserably at offering anything of value to women. Soon after launch, the site quickly became a social media man-cave populated by dudes sharing links to technology-related articles. The problem was, there was a place for this kind of activity to occur, called Twitter.

That is yet to be determined. Just like Napster wasn’t invulnerable to the law, Pinterest may suffer very similar circumstances which may require that is add complication to it’s simple process. Bloggers and graphic design artists have already raised serious copyright infringement issues with the site.

And while the Pinterest terms of use put the accountability of securing the proper permission to share on the user, their position may become a little stickier if they start to monetize the site with ad revenue, generating revenue from content that has been shared without the copyright owners’ permission.

It is still to be determined whether Pinterest can weather the copyright battles better than Napster did, but for now it’s definitely a social network to keep an eye on and try your hand at pinning.

And for all you guys out there… 😉

(sorry guys…had to delete my Pinboards due to my recent research on the questionable approach of the Pinterest terms of use. You can read all about why I deleted my pinboards here.)

3 Reasons Why Pinterest May Succeed Where Google+ Has Failed was last modified: July 26th, 2020 by Social Media Sean
ShareTweetPin It
Share