As of June 2020, close to 1.8 billion people were recorded to use Facebook at least once a day. Since then, Mark Zuckerberg’s social media giant has only continued to grow. Although the company has faced some turmoil, such as an advertiser boycott in 2020, Facebook remained dominant with a steady increase in revenue. In addition, its unprecedented strength in targeting users with sponsored messages makes Facebook ads still effective to this day. 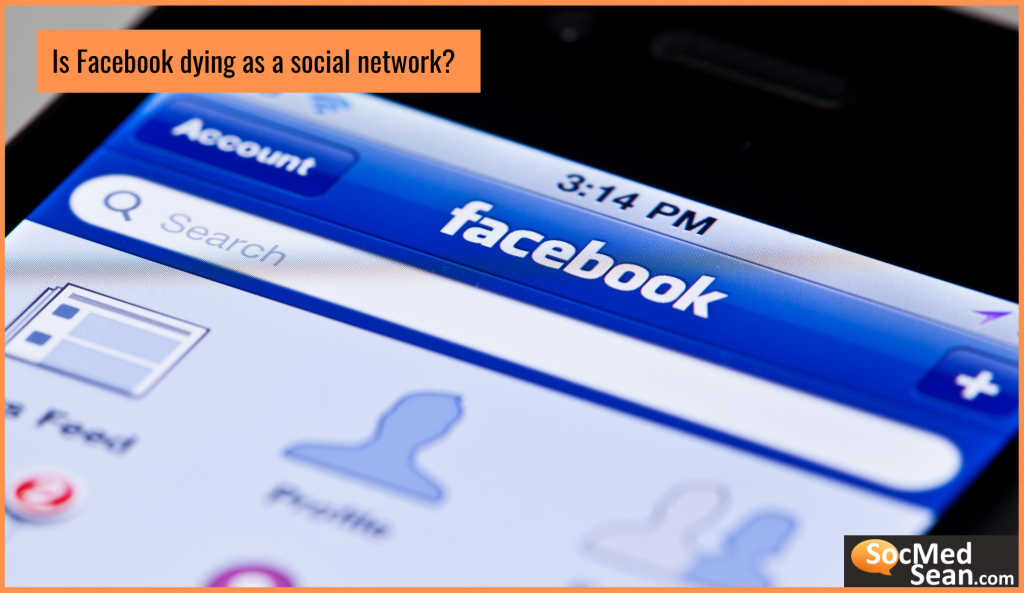 Regardless of its current dominance, some still fear that Facebook may be dying as a social network. The ease of spreading fake news and misinformation on the platform dealt a major blow to the platform’s reputation. And with the difficulty to provide sufficient regulation and oversight to social media, many people have become frustrated with Facebook.

Even with Mark Zuckerberg’s support of implementing internet regulation, some worry that not enough will be done. Time Magazine reports that even with Zuckerberg’s loud enthusiasm of general regulations, the lack of specific provisions diminishes any impact. 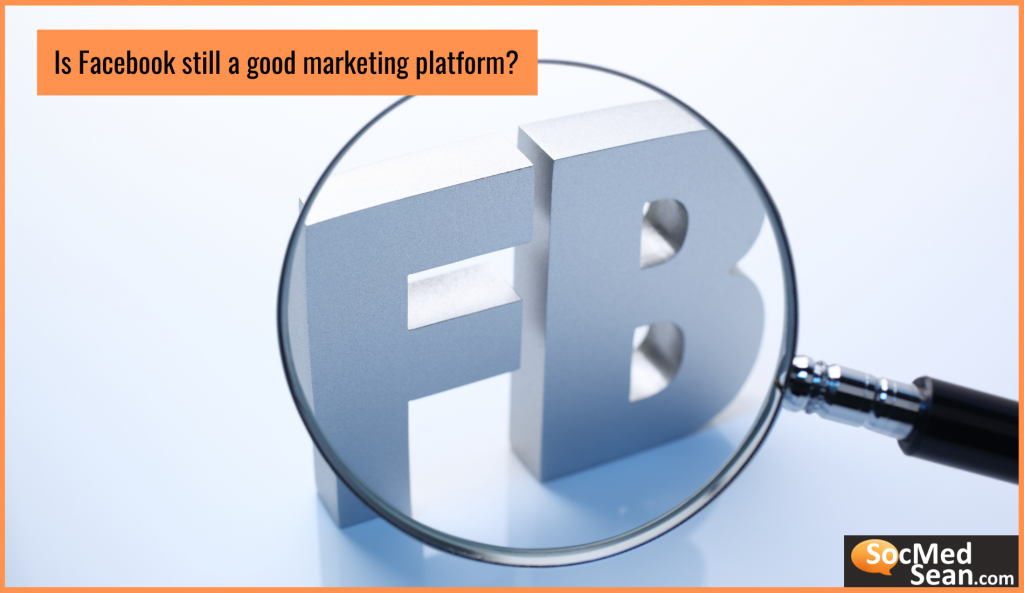 However, even with its damaged public reputation, Facebook remains the world’s largest social media platform. In 2012, Facebook became the first social media network to ever surpass one billion monthly users. Now, as of November 2021, Facebook hit a hit nearly three billion monthly users.
In addition, its powerful ability to target messages on a tailored basis makes Facebook ads still effective. As a result, in a recent survey called The Future of Social Marketing, close to 96% of respondents ranked Facebook in the top three drivers for return on investment. Because Facebook users encompass all demographics and spend an average of 40 minutes per day on the platform, ads can reach an enormous amount of people. 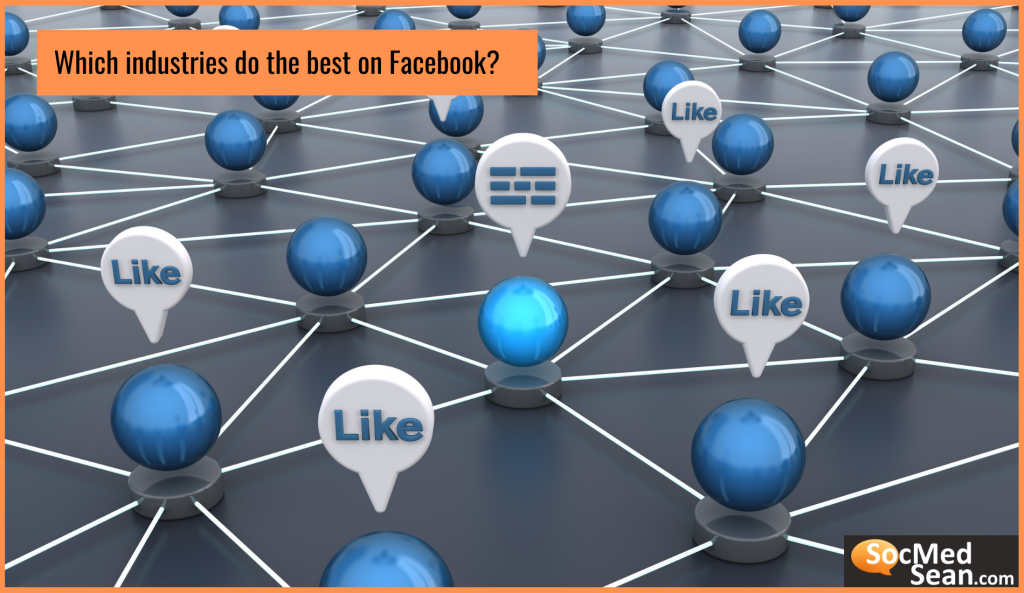 Although any business has the potential to thrive by marketing on Facebook, certain industries traditionally fare better than others. According to SocialBakers, the sports industry has the largest number of fans on the platform. In similar fashion, entertainment and news media businesses also reach immense numbers of people. Other industries that thrive on Facebook include fashion, retail food, electronics, and automotive. 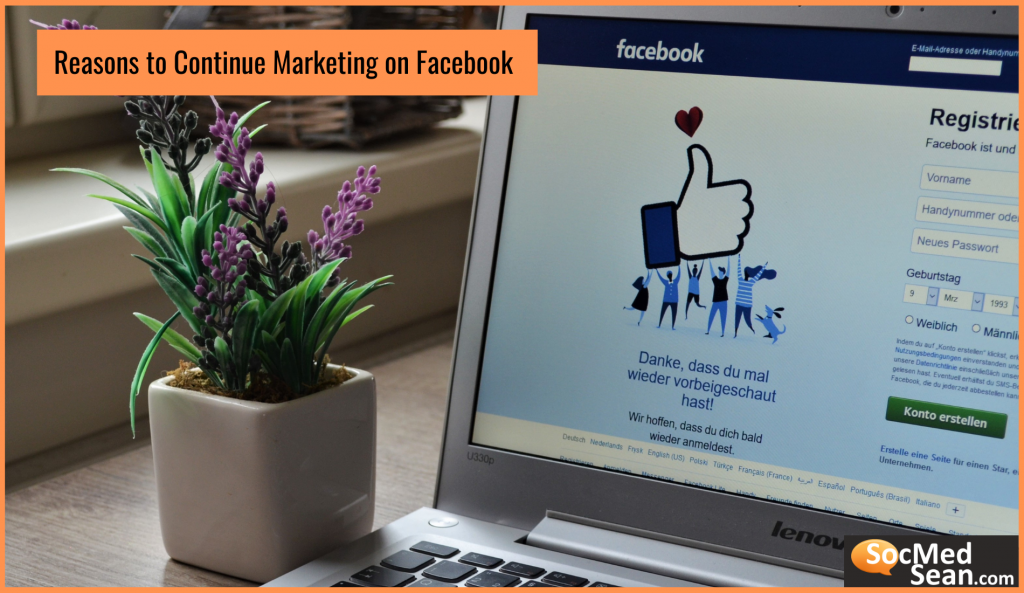 So, is Facebook still a good marketing platform for businesses in 2022? The answer is absolutely yes! Here are five reasons why you should continue using Facebook in your marketing campaigns this year.

Travel and Vacation Industries will Rebound 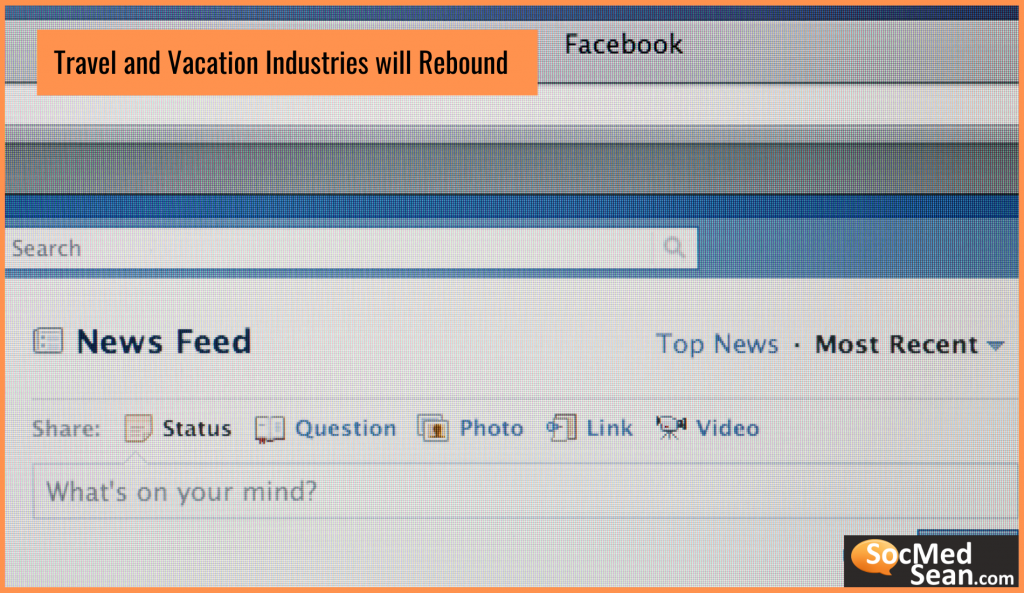 Facebook is a common place for users to share their vacation photos. And while the COVID-19 pandemic dealt a serious blow to the industry, analysts predict massive growth in 2022. In fact, a new report by the World Travel & Tourism Council even predicts that travel will be even more popular this year than before the pandemic.

As the amount of people going on vacations blossoms in the post-pandemic world, the growth will equally be reflected on Facebook. This presents a tremendous opportunity for any company that benefits from reaching users about their travel plans.

Another reason why Facebook is a viable option for marketers is the tremendous amount of data the site collects from users. And as the platform’s userbase continues to grow, the amount of available data increases as well. The direct result is a deeper analysis that ultimately provides marketers with better ad targeting and results.

In addition to analyzing data, Facebook has mastered numerous other methods to predict user behavior. One method is by tracking the cookies. Facebook can track other websites its users visit which enable a more user-driven ad targeting algorithm. Another method Facebook uses is tracking and analyzing likes. By combining these various methods, the platform becomes a data powerhouse that businesses can utilize to get their messages seen by the right people. 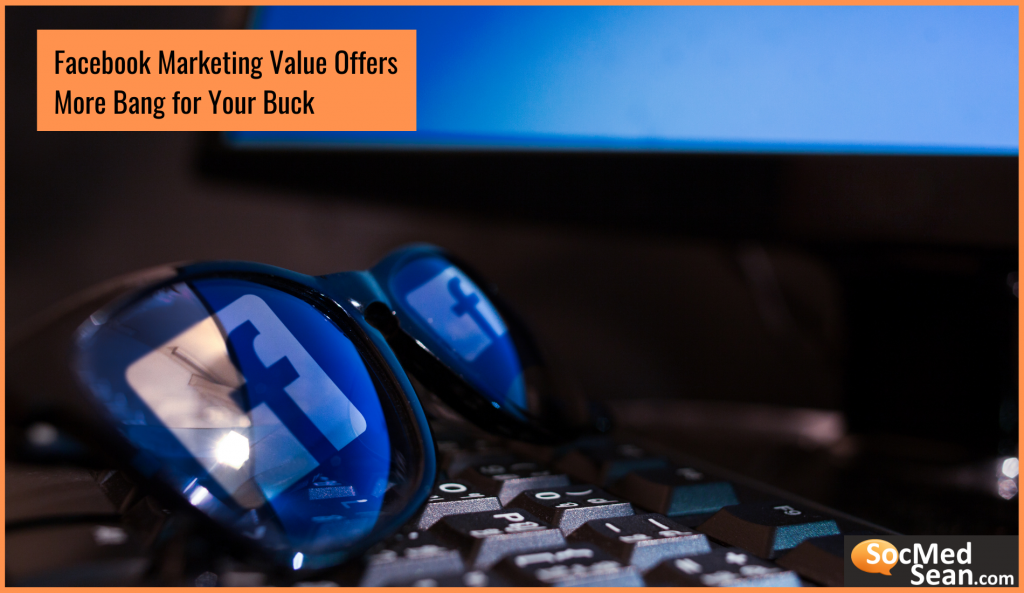 Although TV and radio were once at the top of the food chain for mass media, the internet has since eclipsed those options as the dominant medium. In fact, since 2019, businesses spent more money on digital advertising over traditional media for the first time ever.

One reason business prefer digital marketing to traditional media is because the marginal cost per promotion is significantly less expensive. The average Facebook ad only costs $5.99 per thousand impressions. Additionally, Facebook ads allow you to directly control your own budget while providing estimated results.

Another factor that impacts Facebook’s return on investment is the detailed ad targeting they base on user data. Aside from having full control over your budget, Facebook ads also give you full control over the audience that views your sponsored posts. You can narrow your target audience by age, gender, geographic location, and even interests. In other words, for a lower marginal cost than traditional media, you can promote your ads directly to the people who would be most interested in your business. 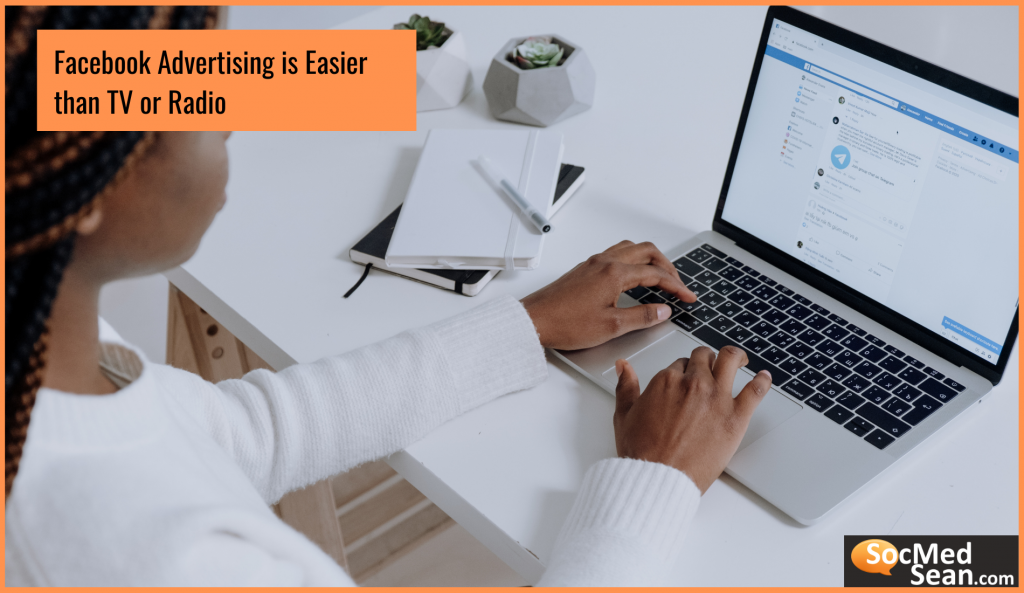 Facebook ads not only allow more control than TV and radio, but they are also easier to set up and manage. The very first step in creating a Facebook ad is to choose a goal. This allows you to easily decide what you want your ad to do. Options range from getting more website visitors to getting more customer contacts.

After you’ve chosen a goal for the ad, the interface prompts you to choose your audience through narrow metrics and adjust your budget. Factors that impact budget include estimated reach and the duration of the promotion. Ultimately Facebook guides you through the entire process and makes decision making easier than ever by showing the projected results based on your budget.

Facebook Ad Metrics are Robust, and Campaigns can be Easily Adjusted

Measuring the results of your Facebook ads is also a comprehensive and streamlined process. The analytics tool on Facebook provides a narrow in-depth analysis on all the people who your ad reached. They break the metrics down into easy-to-understand demographics that let you know who your ad interests most. In addition, Facebook even differentiates the data between people who engaged with your posts versus people who simply saw the post.

Aside from paid ads, the Facebook Insights tool also tracks analytics from all of your company’s organic posts. The user-friendly interface also allows you to compare posts across your page over time to learn information on reach and engagement. In addition, this makes it easy to decide what types of posts work best for your target audience.

With all this data at your fingertips with Facebook ads, you can make informed decisions for future ad campaigns. All the insights can be tracked in real time and provide detailed feedback you can use to adjust your future campaigns. 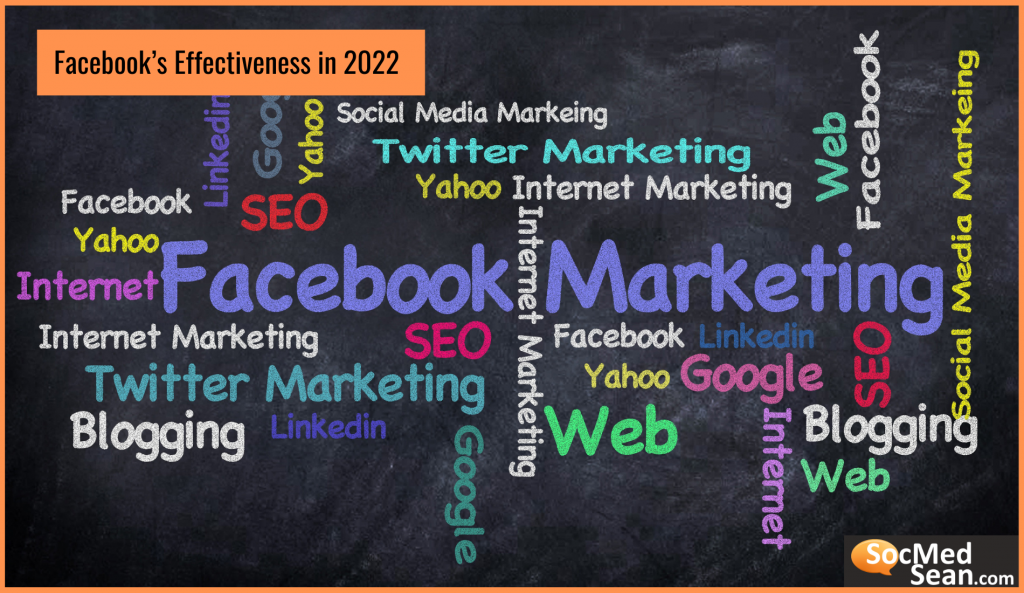 Overall, Facebook’s dominance shows no signs of slowing down. Even amid some negative backlash, the company is still estimated to grow its general userbase over the years. With the amount of user data the company collects, Facebook’s analytics provide marketers a detailed lens on consumer behavior unlike anything ever before.

In addition, Facebook ads offer marketers a significantly cheaper marginal cost per ad, along with deep control over the audience that views it. Combining all of these factors makes Facebook not only an effective, but also essential, marketing tool to use in 2022.

Do you use Facebook to market your business? What tips do you have for companies interested in using the platform in 2022? Share your ideas in the comments!