One of the most common questions that I get via direct message, comments, or tweets is related to a post a published a while back about moving and organizing Facebook photos into different albums.  The steps detailed in that post, though, are specifically focused on individual accounts and the photos posted to your personal timeline.

In that previous post, I showed users that you can move a photo to another album by editing the album and then clicking the menu item for the individual photo that they want to move, as seen in the image below 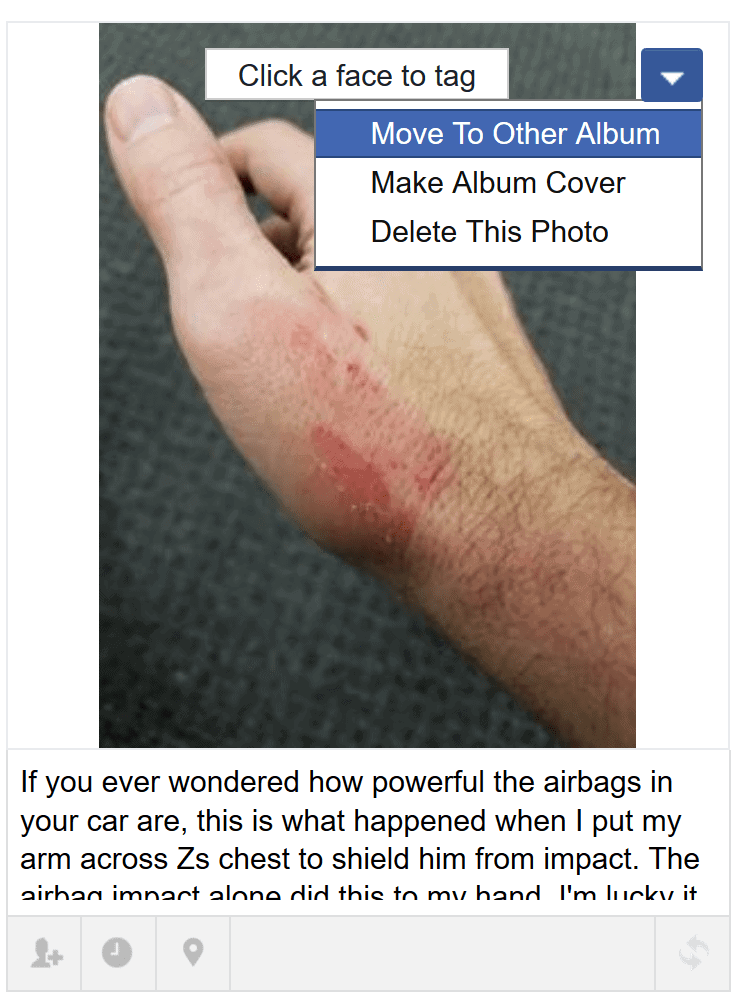 While a lot of folks found those steps to be very valuable, a LOT more surfaced the question asking how to do the exact same thing for a Facebook group.

In fact, just this morning, I received a tweet from @complexrainbo asking about this very specific issue:

@SocMedSean Sean, I have a specific FB Photo and album qu after reading your blog. Ppl have uploaded photos to closed family group page – so they are just in PHOTOS tab area (not an album). I want to move them to albums. How do I do this? SOS.

As you’ll see, in the Twitter conversation, though, there is no solution to this one at this time.

Other folks have sent me questions in comments or via my contact form with questions about how to:

So…let’s try to answer these questions as best as we can. Spoiler alert, though, some of the answers are “you can’t”. Sorry.

How Do I Move A Photo That Has Already Been Uploaded To A Facebook Group Into An Album?

Unfortunately, Facebook just hasn’t extended a lot of features to Groups at this time. Personal accounts and Facebook Pages are able to move photos between albums, they just haven’t extended that feature over to groups.

So…the answer to the question of “how do I move a photo from one album to another in a Facebook group” is….you don’t. The only real way to do it is to:

Step 1 – Download the photo to your local desktop by clicking into the album where the photo currently resides and clicking the “Download” from the hover menu, as shown below. 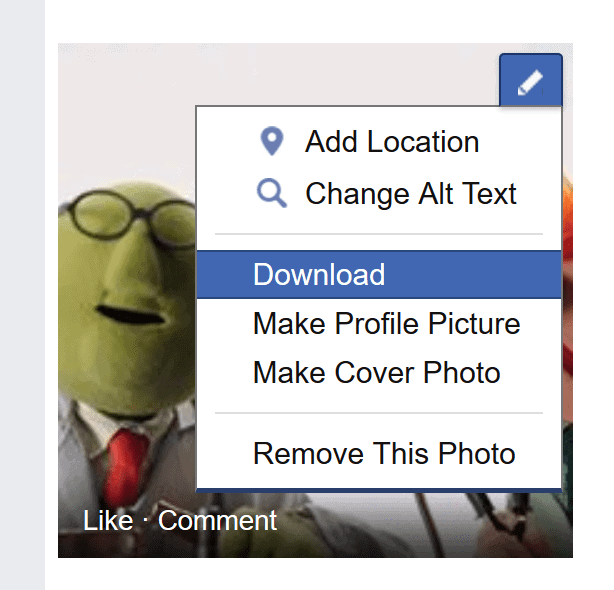 Download your photo to your desktop and then you re-upload it to the Facebook group album of your choice.

Step 2 – Once you have the photo downloaded locally, you can re-upload the photo to a new album by entering the destination album and choosing “Add Photos/Videos” link at the top of the album.

After you download the photo from your Facebook group, you can re-upload it to the album of your choosing.

Before you say it…I know. THIS SUCKS!

For those of us that have been managing Facebook groups for a long time, it just isn’t reasonable to spend hours and hours downloading and re-uploading, not to mention the fact that every time you re-upload a photo to your timeline, it will reset the data to the new upload date, essentially destroying your ability to review the activities of your group in chronological order.

So there you have it.

I’m sorry that this answer isn’t an actual solution.

It’s just asked a LOT, so I thought I would provide a quick post giving the details for those who are searching Google for an actual answer, but can’t find one.

In case you’re curious as to whether Facebook knows this is a feature request…they are. You can see the posts and related posts here:

but Facebook never really answers and they close the posts for comments pretty frequently. 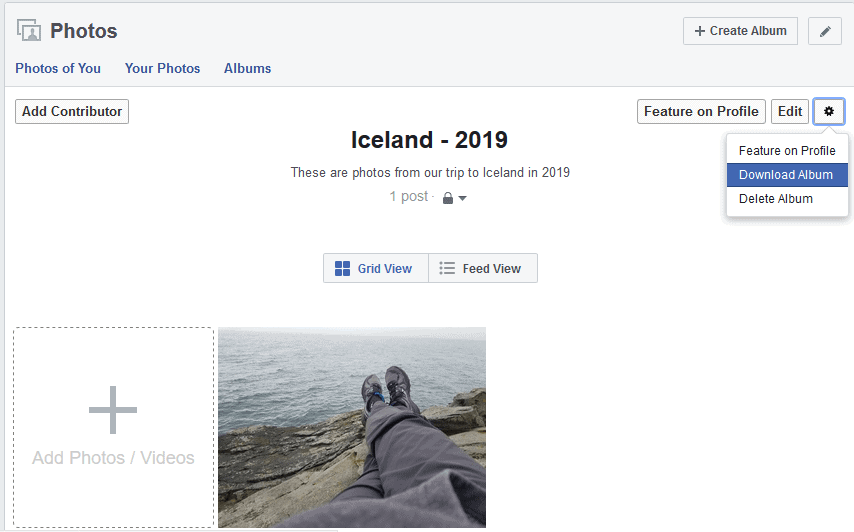 Unfortunately, this is another area where Facebook hasn’t extended the same feature to Facebook groups photo albums. As you’ll notice in the image below, once you click into edit a Facebook album in a group, you don’t see the same option to be able to download the entire group photo album. 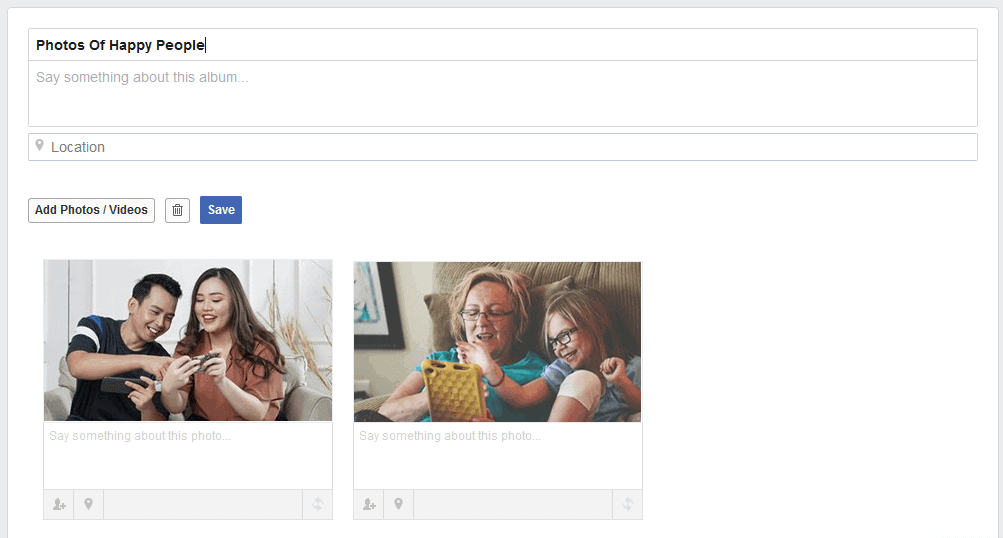 For those of us that run Facebook groups and want to download all of our photos, it only leaves one option…download them individually. Luckily, Facebook has extended that feature to the groups photos, so you can click on any photo and then click the pencil icon and choose “Download…” from the menu. 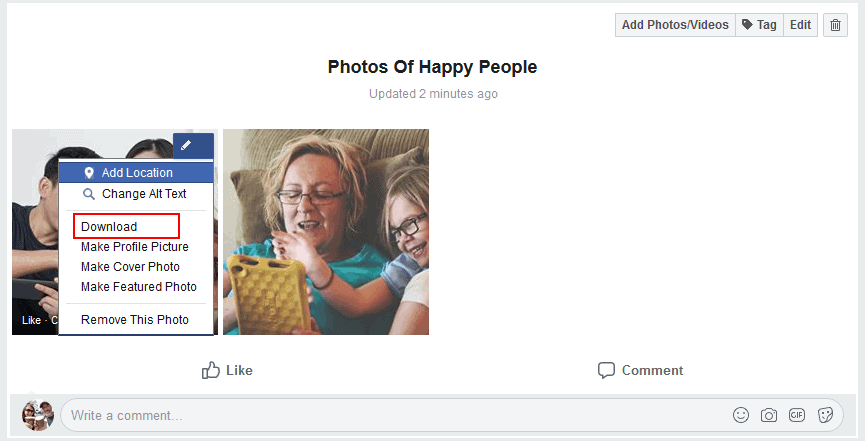 What About Controlling the Order Of How Facebook Display Photos In An Album?

Facebook does give group admins the ability to re-order the photos in your album by simply dragging and dropping them. 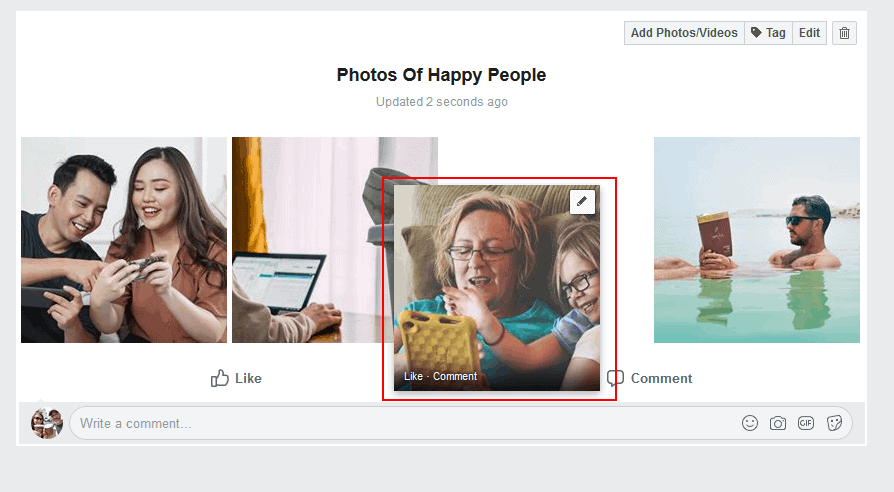 Facebook group admins can rearrange their photos within an album by dragging and dropping them.

Heads up, though, that this feature can get a little wonky and some group admins have noticed that even though they spend a lot of time re-ordering their photos within a group album, they have come back later to find that their re-ordering efforts went out the window and the photos were not in order anymore.

I know, I know…don’t blame me. I’m just the messenger.

Can I Force Facebook To Display My Group Photos In An Album In Chronological Order?

There is some good news on this front…kind of.

Facebook has added the ability for group admins to adjust the order in which their photos are displayed within an album. You can either display them by date taken from earliest to latest or latest to earliest.

To adjust the order in which your photos are displayed, you need to make the selection when you are uploading a new photo. I have yet to find anywhere to make this change without doing it while uploading a photo. If you know of a place to adjust this setting, leave a comment and I’ll update this section.

Facebook does give group admins the choice about how to order the photo when you are adding them to an album.

Remember, though, when I said this was good news “kind of”? Here’s the kicker.

What If I Can’t Even Find The Option To Add A New Photo Album To My Facebook Group?

It sounds so simple, but believe it or not Facebook doesn’t really make it that easy. I have received this complaint a few times, so I figure it’s worth adding it to the post in case there are those who can’t find the feature.

To create a new album within your Facebook group, just navigate to your group and click the “Photos” link in the left navigation.

From there, you should see a button that says “+ Create Album”. Click that button and you can batch upload photos to a Facebook group album.

OK…But Is There A Way To Organize The Photos In My Facebook Group Albums Without Losing All The Likes, Comments, And Engagements?

Unfortunately, the answer is no.

Because Facebook doesn’t allow group admins to move photos between albums without downloading them and then re-uploading them there isn’t a way to preserve those likes. When you upload the new photo, Facebook considers it  new object and it sets the likes, comments, etc…to zero.

So, as Facebook group admins, we’re stuck deciding between disorganized photos and albums, or starting over and losing all those engagements and comments.

So there you have it, some answers to the questions I hear frequently about managing photos within Facebook groups. I plan to update this post fairly frequently with new challenges and answers, so keep the feedback coming and I’ll do my best to provide updates when changes occur.

Have you discovered a way to move photos between albums in a Facebook group? Do you know of a way to re-order or structure Facebook group albums? Be sure to share your experiences (and even frustrations) in a comment.

Who knows, your tip might help alleviate others’ frustrations. 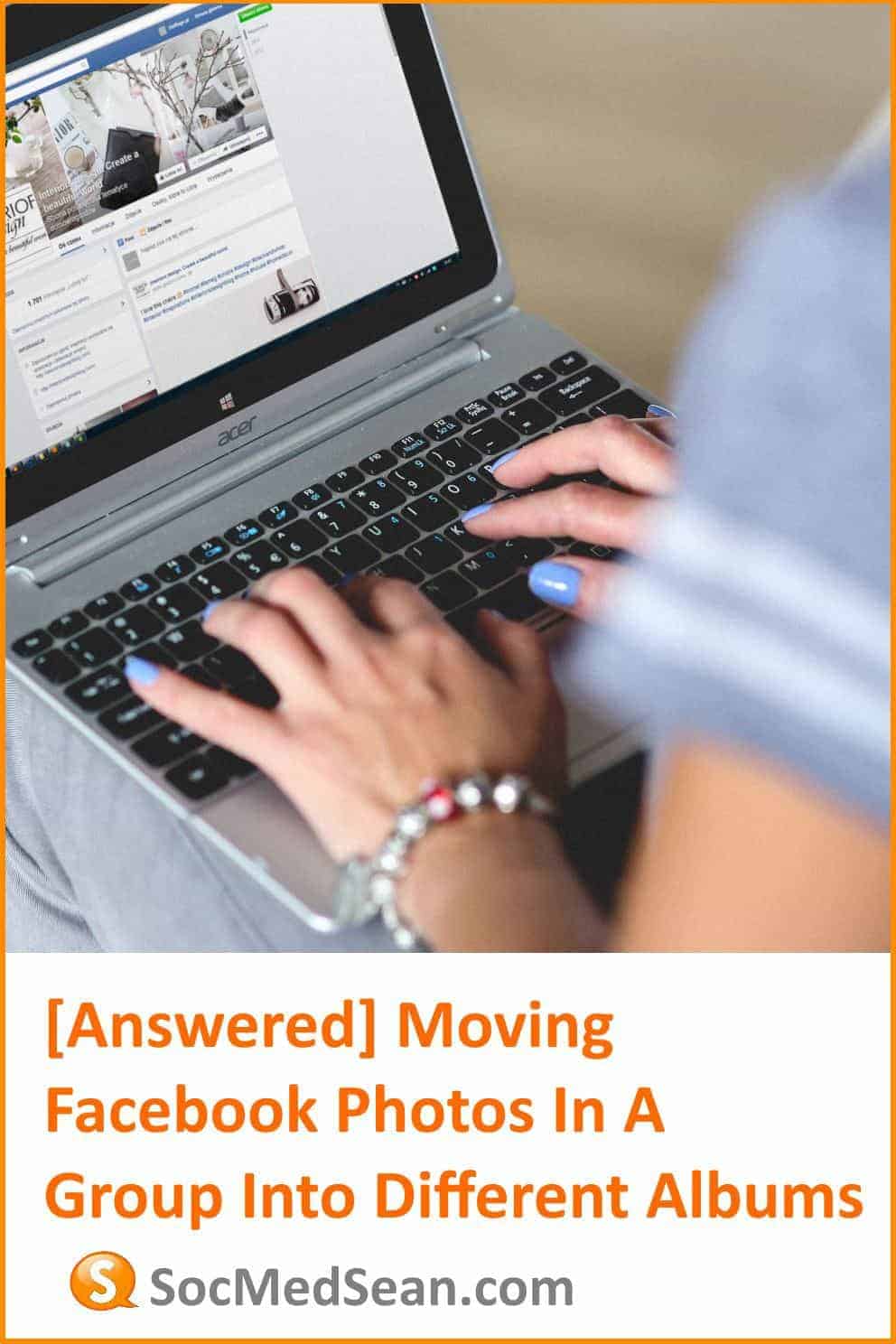 Hello everyone, thanks for the add. I’m new to running a group as an admin and I am most perplexed about albums. I was hoping that members of my closed group can post to existing albums their contributions; however, they post and we can’t see their post. (They are posting with photos on devices, not already posted pics). My new album will say that there are 43 posts but only the admins post can be seen (3). Any help would be greatly appreciated.

We have checked sharing settings, etc with no results. I’d really like to make this work for our group.

I apologize if this is a repeated question.

The date is 3/9/2022. Any Updates on how to move pictures in my post. No matter what I try I can’t seem to do it. Please and thank you

As far as moving photos within an album in a group, I noticed when I looked at an album where I put all the grandchildren of my grandparents in order by family they are in but when you look at the album they are not in that order however when you click edit, they show in order so I don't understand when you come out of the edit they are not in order. This has always bugged me because I like to arrange things in order. And I also like to put albums in order by whatever subject it is and I have wanted this for many years. I swear for 10 years now and yet Facebook still has not updated or added this feature. Albums are even more important in a group of a bunch of people than to just one's own individual page so I don't get why they don't update this feature. It feels like no one works at FB if they can't add these basic features after many years.

yez, Fakebook is just a pain-in-the-you-know-where, such a pathetic work!!

With the new FB, I find I can't arrange the order of the photos within an album in a FB group. I think I should be able to do it by drag and drop, but while in edit mode it allows me to drag, but when I drop the photo returns to its original position. It doesn't seem to be browser related - I've tried 3 different browsers. Any ideas?