Social media amongst teens is on the rise. In fact, according to a 2012 study by the Pew Research Center:

Fully 95% of all teens ages 12-17 are now online and 80% of those online teens are users of social media sites. 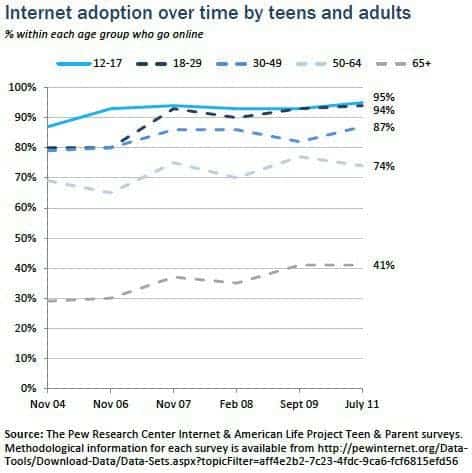 Yes…that’s right. That chart shows 80% of the teens surveyed were actively using social media sites. That means, if you have kids between the ages of 12 and 17, it’s likely they are already using social media sites, even if you don’t know it. And as this adoption grows, it’s becoming more and more important that parents help their children understand the appropriate use of social media sites and the potential dangers that can arise. Yes, now it’s not just a talk about sex, drugs and alcohol…you have to throw social media into that mix, as well.

Even if you’re trying your best to help your kids understand tough topics like cyber-bullying or the Newtown school shootings, as their adoption of social media channels grows, your governance over what content they consumer is going to be limited. Through sites like Facebook and Twitter, they are going to see posts, discussions, photos and links to articles that might expose them to content that you would prefer to shield them from.

But talking to kids about uncomfortable topics isn’t always easy. Just like educating yourself about sex, drugs and alcohol is important before having “the talk”, parents should also take some time to become familiar with information about texting and sexting and how social media sites like Facebook, Twitter and YouTube are being used by teens.

To help prepare yourself, check out the study conducted by  CommonSenseMedia.org, where more than 1,000 13- to 17-year-old teens were surveyed nationally to understand how they perceive social media activities and how they affect their relationships and feelings about themselves. Some key statistics from the the study include:

Additional highlights from the study are included in the infographic below and you can visit the CommonSenseMedia research page to download the full report.

Are these findings in-line with your observations about social media? Have you had “the talk” with your kids about their use of social media sites? If so, how did it go?

I would love to hear thoughts and experiences.

great article! thanks for sharing.

Some days I prefer Social Media to dealing with real life also!