This blog post was originally posted over at PopGoesDad. Thanks to Kurt for the invitation to Guest Blog.

I admit it…when I was in high school, I was a total metal head…and so was my mom.

It was kind of strange growing up with a mom who listened to AC/DC, the Scorpions, and M­ötley Crüe and there were some awkward explanations to my friends about why she often wore a black Van Halen 1984 tour t-shirt. But any downsides to having a rock ‘n’ roll mom were usually made up for by the fact that she not only listened to the music, but also seemed to understand it. Which helped her understand me a little better.

During my teen years, the big issues facing parents were the topics of “sex, drugs and rock and roll”. Most parents seemed to (somewhat) understand how to have the sex and drugs conversations with their teens, but rock and roll was an entirely different story.

At the time, Tipper Gore and her Parents Music Resource Center were busy trying to blame all of the woes of the 80s and 90s on the “Filthy fifteen” and the bands that produced them. Parents who didn’t listen to rock didn’t have a clue how to talk to their kids about it. So kids were left to their own interpretations of lyrics and the music, which sometimes had negative consequences.

My mom was a little different, though, and she took a slightly different approach. She and I talked a lot about music and lyrics…more so than sex or drugs. Here stances on sex and drugs were pretty straight-forward:

For sex, it was – “Wait, but if you choose to…use protection.”

For drugs, it was – “Do them at your own risk. Your brain is yours to waste, but I won’t bail you out of jail for drug charges.”

So I did. I remember once asking her about the lyrics to AC/DC’s “Dirty Deeds Done Dirt Cheap” and we had a pretty good chat about revenge. The fact that she knew the song, knew the lyrics and was able to have the conversation put her in control and helped me better understand not only the music, but a concept that impacts teens every day.

So what does this have to do with social media?

I’m pretty sure that social media has replaced rock and roll as the complex issues facing parents, today. Too often, when I tell other parents that I’m the Director of Social Media for a digital agency, I get a blank stare and a request for clarification of what I do that goes something like “Does that mean you play on Facebook all day?” This is usually followed by  phrases like “I just don’t get that stuff!” or some nonsense like “it’s all about cats on skateboards or people eating oatmeal!”.

For those that do have some understanding of social media, I still hear things like “my kid spends way to much time on Facebook” or “I’m not sure how we’re going to handle this whole ‘sexting’ thing.” And then they stare politely at me, as though I’m expected to explain it all to them and clarify why their kids love Facebook and how to keep them from sexting. 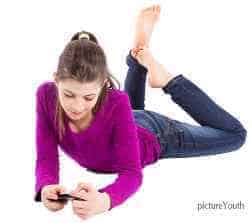 My response in those conversations is generally the same each time. I start with a simple question. “Do your kids know what social media is?” The answer is usually “Of course!” because these are kids that have grown up with Webkins online, Club Penguin, and YouTube.

I then follow with “Do you know what social media is and how to explain to them what is and isn’t appropriate behavior online?” This one gets more challenging responses. Most parents have thought about the conversations that need to be had about online pornography and viewing inappropriate materials. So at least some thought is usually given to the topic.

Finally, I ask “have you had a conversation with your kids about what is and isn’t appropriate online and on their mobile device?”

Believe it or not, the answer is more often than not “No.” The fact that most parents haven’t had a “social media” chat with their kids tells me that:

c) They recognize that it’s an issue, but don’t know how to address it

So if you have kids who are using the Internet, I ask you…which category do you fall into? Have you had “the talk”? Do you plan on it? If so, how will you approach it?

Don’t let your kids engage in social media alone…it’s a scary world out there on the Web and they’ll need all the guidance they can get.

It might be awkward to have the conversation, but I’m pretty sure it will be less awkward than finding out that they have posted naked photos on the Internet.

As always…would love to hear thoughts and similar experiences in comments!