Author’s Note: I’ve been noodling on this post for quite a while now. I guess I’m just a sucker for technological irony. Before we get started, I’m going to be up-front with the fact that this is a bit of a long post. Hang in there…it’s worth it, and you’ll get a comic strip and some great “tweetables” at the end.

Okay, here’s the scoop. Since February, 2015, Google has been adding tweets into their search index and then including them in the search results. There’s a history of them doing this, but Google stopped including tweets in their index around 2011. Rather than re-hashing the history here, take a moment and read this great article by the folks at@HubSpot explaining a bit of the history and their thoughts on why this is a good thing.

Don’t get lost over there at the HubSpot site, though, if you’re interested in learning why this is such an ironic situation. Get the scoop and come back. I’ll wait.

{Getting coffee and a doughnut waiting for you to return}

Glad you’re back. Now that you have the details on why HubSpot theorizes that tweeting could become a potential SEO dream, I’m going to show you not only that it COULD work, but that it actually DOES work.

Let’s walk through a scenario. Imagine that you’re conducting some research for an article, presentation, or blog post about developing a social media budget and you want something humorous for your PowerPoint presentation. You might head over to your friendly search engine (aka Google.com) and type in a query like:

If you were to conduct this search today, you’d likely see my social media budget blog post (yeah!) within the first 5 listings in the index and maybe even one or more of my comic strips in the Google images. 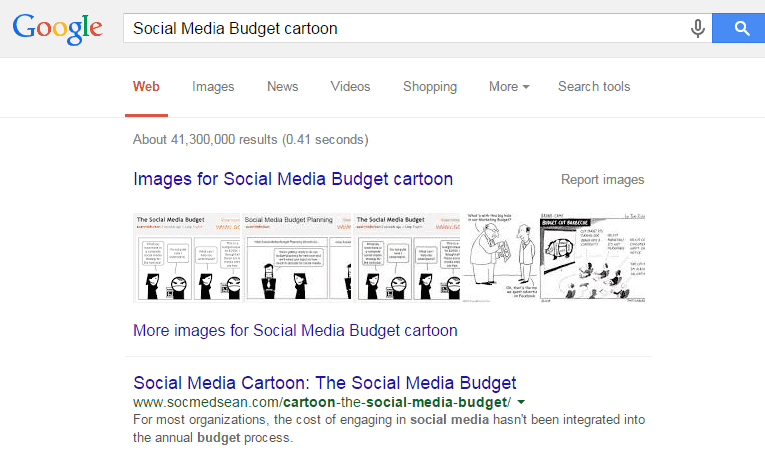 Okay, so that’s simple and straight-forward, right? My post ranks for a query that is darn close to the exact match of the title of the blog. Not rocket science.

But what if I want to rank for other keywords that aren’t necessarily in the title? Traditional SEO practices would dictate that I should “optimize” the article to include other keywords that I want to rank for. The challenge, however, is that Google has clearly indicated that over-optimizing content with too many keywords can, and has, resulted in authors being penalized in the rankings. As a result, SEO practices had to change, focusing on the optimization of one or two keywords or phrases.

If you’re not up-to-speed on the Penguin algorithm changes and the over-optimization smack-down that can happen (aka the “Penguin-Smack”), take a second to learn more in this great article by the folks at @Moz. Again, I’ll wait, but be sure not to get lost.

{Waiting…getting more coffee, eating M&Ms, pondering why we drive on parkways and park on driveways…}

Okay, so you’ve made it this far, now let’s get to the juicy stuff. So, if we can’t over-optimize with keywords, what’s a content marketer to do to get their article more broadly indexed in Google without stuffing a bunch of keywords and risking a penalty?

It appears that the answer is simple…Tweet.

I’ve been testing this theory for a while now, tweeting links to my own articles with different verbiage in the tweets and, of course, with a broader range of keywords. And tonight it paid off. In continuing the research for this post, I have found that exactly what I theorized would happen…happened. I found that Google is now indexing my alternate tweets, which means that my tweets are actually able to be used to expand awareness of my blog posts if they contain verbiage other than the title of the article.

So, for example, if you were conducting the same research, but instead of something funny you wanted to learn about planning your social media budget. As an alternate query in Google you might type something like:

Unfortunately, my blog post doesn’t rank for that (or at least not highly). But I started tweeting lately with the variety in keywords, including a tweet that included the words “Planning” and “social media budget” with the high hopes that Google might pay attention to those keywords and index the tweets. And guess what, there is at least some evidence that it’s happening. Take a look at the image below that show one of my tweets being included in another Twitter member’s list.

Author’s Note: A special thank you to @caseyferrell on Twitter for including me in the PharmaSM list that allowed me to see that this tweet was indexed.

Now, before we go all crazy and start trying to optimize every single tweet, be aware that I DON’T have direct proof yet of one of these alternative tweets showing up directly in the index. I’m still waiting on that, buy my Twitter experiment has only been running for 6 weeks and I’m a patient guy. I promise, however, that when I find that direct evidence of an alternative tweet showing in the index, I’ll blog and tweet about it <G>.

Okay…so what about the irony? Why is Google indexing tweets ironic at all?

Because the only thing that SEO and content marketing professionals fear as much as a Penguin-slap is a Panda “Bear-Hug”. Yeah…I totally made that up.

You see, Panda is another Google algorithm update that penalizes sites that leverage link-farms. You know, those giant sites that are made up of nothing but short descriptions and links that are often categorized together. We used to call them directories, but now we call them bad news for your site if you use them. A Panda penalty can hit anyone running or using a link farm with some pretty drastic drops in traffic.

So…as a reminder, a link farm is a site with very little text and lots and lots of links.

{waiting for the light bulb to turn on….}

Yep…Twitter is one. giant. link. farm.

In fact, I would argue that (other than Google or Bing), Twitter is probably the largest link farm on the planet. Yet those who use it effectively will not pay the Panda penalty, but be rewarded with links from a broader range of keyword traffic. Twitter even arranges links into nice little categories through the use of hashtags. Just like link farms used to do.

So there you go. The technological irony of Google indexing tweets, and here’s the comic strip to go with it. 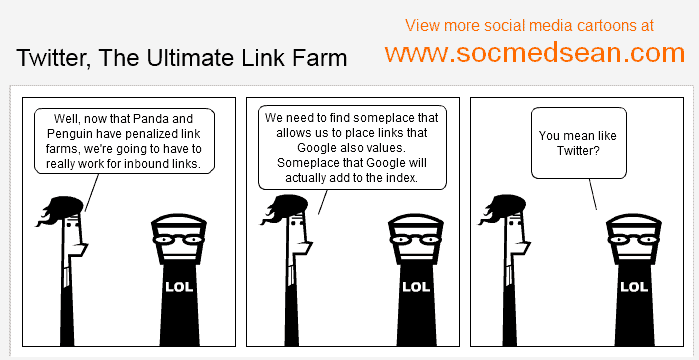 Agree, disagree? Have some other experience with Tweets being indexed? I’d love to hear about them in a comment!

Brilliant, looking forward towards further findings on this topic.